Should I repipe my home with PEX piping?

Whether it’s low water pressure, rust in your water, or possibly even pinhole leaks, re-piping could be the answer for you. If you spend any time looking into re-piping, you’re going to hear about PEX. It’s a popular re-piping option and today, we’re going to learn all about PEX – what it is, how it works, and what’s involved in re-piping your home with it. Gary Gould is with us from TDT Plumbing. He’s an expert in leak detection, plumbing restoration, and re-piping.

CHARLIE: Let’s start with PEX itself. What exactly is PEX? Is PEX a thing or is a description? What is PEX?

What is PEX Pipe?

GARY: You know, I think most people are going to say it’s plastic pipe, but what PEX stands for is polyethylene. It’s a type of plastic and the X on the end represents it being cross-linked. What you can compare that to is kind of harder type material plastics, but basically polyethylene, right?

CHARLIE: So, we have a plastic pipe that we’re going to be using in place of the galvanized pipes in our house?

GARY: If you have a problem with old pipes, like we do in central Houston, or leaking pipes with copper or galvanized, PEX often is the plastic of choice.

CHARLIE: It certainly seems to be almost the Kleenex of re-piping. I mean, it’s the brand everybody thinks of, but it is a brand, right?

GARY: PEX is the product material.

GARY: But, there’s all kinds of brands, right? You have Uponor might be one style. There’s maybe dozens of manufacturers and they kind of all center in on how they connect the tubes. PEX is just your very … It’s like saying coffee.

GARY: The category, there you go.

How is PEX Pipe Installed?

CHARLIE: You talk about these pipes coming together. How does that work, Gary? How does this replace the plumbing system in the house?

GARY: Well, typically what you’re going to do is run a new line parallel, let’s say in the attic, next to an old line, and then everywhere there’s a T in the old line, you’re going to cut in a fitting in a T on the PEX pipe, and then you run … basically, you run a new branch line over and drop it down through the wall, string it through the wall and you drop it down to whatever water fixture there might be there, like a sink or something. Typically, that’s how it’s done. You’ll run a hot and cold line and just kind of mirror what’s existing, and then abandon the old pipe, and put in a new.

CHARLIE: I’m going to wind up having a collection of plastic tubes running through my attic where the plumbing used to be?

CHARLIE: You talked about the connections where you put these together. Is there more than one kind of connection that is used to make these T’s and go down to the fixtures?

GARY: Absolutely. This is something for your audience to think about when a company comes in to position or sell a re-pipe using PEX because there are some folks that are going to use a brass or copper style fitting. You can also use various other snap together SharkBites, plastic type fittings. Each one of these is another level of install. When you put in that pipe, certainly it’s nice to anchor it down on walls, but if you anchor it, you usually have to make access so that you can anchor the PEX pipe to a stud or what have you. All of these things and how they’re connected really kind of different tiers of install. It’s the quality of that workmanship and how that pipe’s installed that you’re looking at. There’s all kinds of types of fittings out there.

CHARLIE: When you say the SharkBite one, that’s the one where it just clamps down on there and it causes the connection. The copper ones, I imagine, are more the high end. Do they work the same, Gary, or do you prefer one versus the other?

What is the best fitting to use with PEX Piping?

GARY: They’re very similar. SharkBites is a great technology it’s kind of and basically you slip your tube in it, your PEX tube and it grabs onto it. You can remove those also by pulling back a little clip ring. I, personally, six in one hand, half dozen in another, I like the metallic fittings. We like to, let’s say where the pipe comes out of a wall, put a 90 degree fitting that the PEX stops in the wall and then we use a copper tube that comes out. It’s much more like original. I like the look of it, personally. I think it’s a much better install. But clearly, there’s a dozen different ways to install pipe as long as we’re to code, we like the product, we let the customers decide if they want to go one direction or another.

CHARLIE: Back up a second here, so you’re saying that some installers will put the PEX in and just leave the plastic pipe coming out of the wall?

GARY: We don’t like to that ourselves at TDT Plumbing, but that’s the difference in maybe a higher quality installation, a little better workmanship, and maybe something that’s average or something along those lines. I, personally, at my own home, would not like to see either a blue or a red plastic pipe noodling out of the wall with a valve on it. I’d rather see something that you can put a nice discussion on, a little cleaner, and it takes a little extra time. The difference between the guy that comes in and does your house in two days and a guy that comes in or a company comes in and does it in four. You get the quality through the products that are being used. They have to be installed right. You don’t want to have to go through it another time and so let’s get the re-pipe right.

CHARLIE: Does it make a difference as far as how well it’s going to work, whether you use the PEX coming out of the wall or you use one of these connections? Does it affect how well it works, Gary?

GARY: I think water flow is not going to be much different whatsoever. I do think it’s important, though, having a flexible pipe, if you hit it, it may be more subject to damage or failure. I just think that over time, the better installation is going to have a little bit more quality parts. There’s a visual thing there, what you’re looking at, but also, we’re looking for a long term solution for whether you’re there for a long time or you resell the house. I think it’s a better package in the end.

CHARLIE: Now, we’ve talked a lot about PEX and that kind of product for re-piping in this method. Are there other processes that can be used besides PEX to do this kind of re-piping?

What other types of pipe can be used in a house repipe?

GARY: Oh sure. PEX is nice because it comes on a roll and I can carry it in, it’s light, it’s easy to manage when you can just throw in on your shoulder like an extension cord. But, there’s CPVC, which is another type of plastic that is certainly approved in the city of Houston and almost anywhere in the US, but that’s a 20 foot piece of pipe, it’s straight, it’s rigid. Let me tell you, you try to walk in a door with a 20 foot piece of pipe, it’s cumbersome. You can also re-pipe with copper. We happen to really like our epoxy coating technologies, e-pipe. That also is a great option and it’s the least intrusive of them all, but there’s certainly multiple types of pipes that can be used, and coding technologies.

CHARLIE: You said intrusion. Is that another way of saying “holes cut in my walls”? 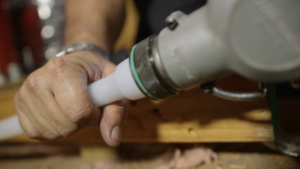 GARY: Holes in your walls, absolutely. The problem with a re-pipe, conventional re-pipe, and I said this a little bit earlier is that, typically, these are done before you put the drywall up. The piping goes into the wall, you get your inspection, and then they cover it all up. In order to re-pipe it, you’ve got to get it into the wall. Often, the only way to get the pipe back into the wall is by cutting holes in it. The people that see the most damage are going to be two-story homes where the piping often is run between the first floor ceiling and second floor floor. Those guys, typically in that first floor ceiling, you’re going to see holes everywhere. It all depends on which way the boards are running and how it was installed the first time. The best time to pipe a house is when it’s new. As you re-pipe, you’ve really got to get create. Damage, wall damage, having to put drywall back and to re-paint or wallpaper, these are the things that are kind of your secondary costs when it comes to re-pipe.

CHARLIE: That’s not to say that PEX is not a good solution, it’s just one of the factors you have to talk into account when you consider doing a PEX re-pipe.

GARY: Absolutely. It’s a great solution. New homes today, we build homes every week of the year, and PEX is one of the pipes we use often. There are several ways to take care of plumbing problems and that’s one of them. It’s as good as any, but it has certain cosmetic aspects that surround it and what it takes is inviting us to come to your home, take a look at it, and then we can work together and say, “Hey, maybe this makes more sense. Maybe it’s more cost effective.” I don’t know about you, Charlie, but when you’re looking at a project, most often we’re driven by, “How do we save money?” That might be a great solution and if it is, we’re going to tell you that. There may be other options as well that are also great solutions and maybe more cost effective and will help you find that direction as well.

CHARLIE: Find that happy balance between cost and solution. You have a number of them as you say, right?

GARY: We sure do.

CHARLIE: You can learn more about PEX re-piping and all the plumbing restoration options available from TDT Plumbing on the website tdtplumbing.com. Gary, thanks for taking time to help us understand the PEX re-piping and as a re-piping option today.

GARY: Thank you, Charlie, appreciate it.